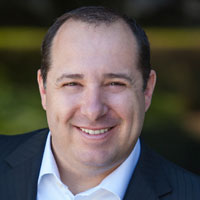 As Vice President, Terry will support the President and oversee 2015 special events, such as the Summer ACRE Shaker and holiday party. He has been involved with the organization since 2010 and previously served as Sponsorship Chair.

“Our board is enthusiastic about the upcoming year and the positive growth in our industry,” shared Terry. “We are focused on continuing to provide valuable networking and educational opportunities for our members, and introducing the organization to the next generation of real estate professionals.”