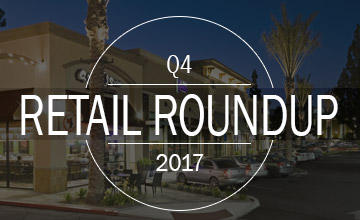 Stable market conditions remained across the Greater Los Angeles region at the close of 2017. Vacancy improved slightly with the Inland Empire improving from a rate of 7.5% to 6.9%. More than 1 million square feet of new construction was delivered, and all counties recorded positive absorption: Los Angeles (1,602,540 sf), Inland Empire (1,425,609 sf) and Orange County (199,187 sf). Overall, 2017 came to an end with favorable market fundamentals and a positive outlook for 2018 thanks to a holiday season which saw an increase in consumer spending according to ICSC.