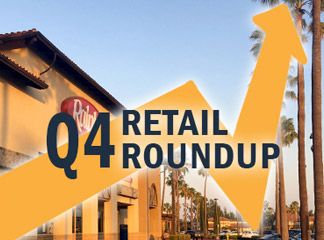 Transaction activity did not slow as 2016 came to a close. Vacancy rates remained steady in fourth quarter across Orange and Los Angeles counties, and took a step forward in the Inland Empire improving from 7.9 to 7.5%. Off-price retailers, such as SteinMart, TJ Maxx and dd’s Discounts showcased below, remain among the most active with a strong pipeline of transactions expected to come to market in the first half of 2017. Retailers continue to reevaluate brick-and-mortar strategies, introducing alternative formats such as Target’s flex-format location slated to open in Orange in Fall 2017.