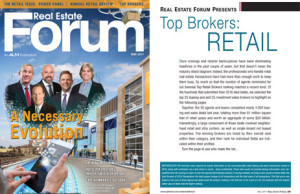 Coreland Companies is proud to announce that its Leasing Team, led by Senior Vice President Matt Hammond and Vice President Ben Terry, has been named among the nation’s Top 25 according to Real Estate Forum magazine.

The biennial ranking features the top leasing and investment individuals and teams across the United States. Hundreds of nominations were fielded and scored brokers based on total number of 2016 transactions, total square footage of all transactions and total value of transactions. The final overall ranking was based on the sum of the above. 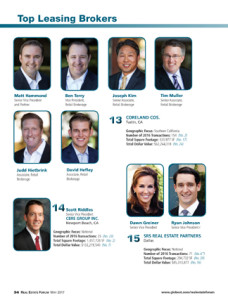 Coreland’s Southern California team, including Senior Associates Joseph Kim and Tim Muller and Associates Judd Hietbrink and David Hefley, ranks No. 13 overall. The team finished No. 2 in total transactions for 2016, No. 17 in total square footage and No. 24 in total value.

The 50 leasing and investment brokers honored combined for a total of 4,500 deals last year totaling more than 81 million square feet of retail space and worth an aggregate of $20 billion.

For the digital edition of Real Estate Forum magazine go to: http://www.globest.com/real-estate-forum/.  Click here for the Leasing and Investment Team rankings.